After an amazing breakfast at the Osoyoos Legion, the ride team broke into two. Half the team went up the Anarchist, the other half were bussed to Penticton to ride to Osoyoos. I opted for the amazing lakeside ride and super lunch in Oliver.

Shortly after leaving Osoyoos we had an unfortunate incident when one of our riders took a spill off their bike. After a quick check over and run to the hospital, the rider was cleared, but will be a spectator, cheering the team on for a few days. 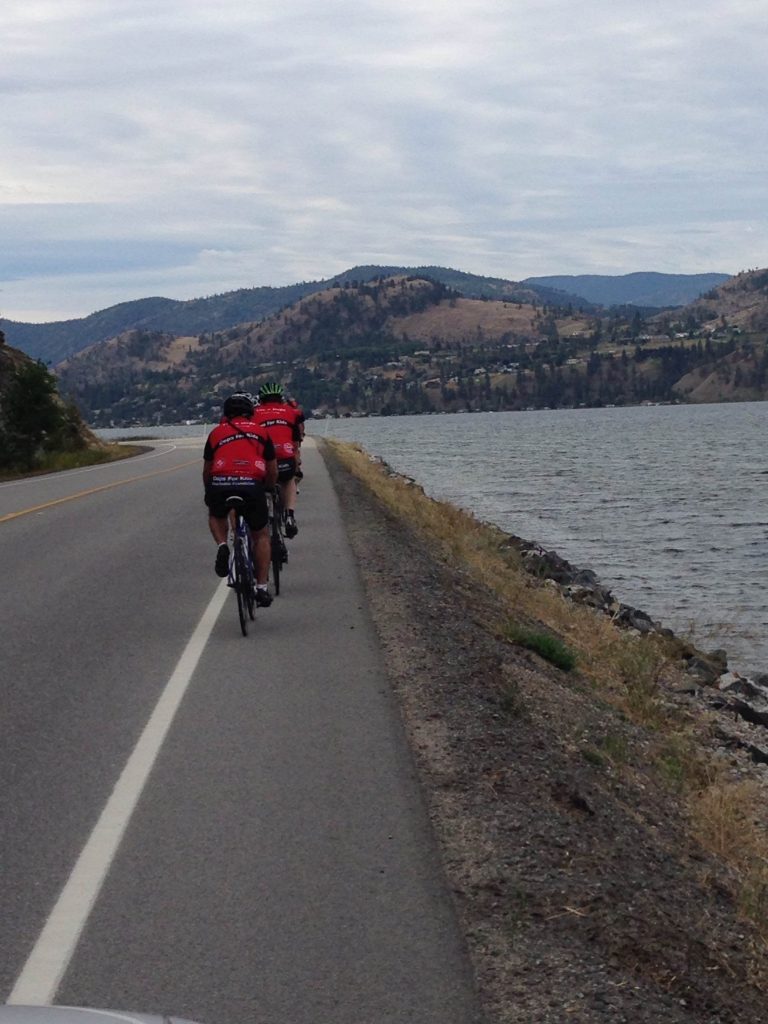 The weather was great for the scenic tour south, and we have a very warm welcome to the Oliver Fire Department by the Lioness Club of Oliver, Oliver mayor and the youth ambassadors. The cold cut sandwiches and beef barley soup was amazing. Several donations were accepted by various clubs totalling almost $2000. We were treated to a little airshow of vintage military aircraft, which was neat, but a little loud as we were being addressed, but we got through it, with the occasional break in speeches. Once lunch was done, we mounted up and off to Osoyoos we went.

The temperature rose rapidly, but it was a good ride to Osoyoos where we loaded up our bikes, got onto the bus and headed off to meet up with our other teammates. The timing could not have been better as we arrived just outside of Greenwood within minutes. A quick ride brought us to the Deadwood junction where we filled up our water bottles with ‘the World’s best water’, ate White Water Granola bars, watermelon and oranges. The Greenwood Mayor was once again locked up in jail, hoping to be released. Unfortunately for him, the donation jar to keep him in jail was looking way more full then the jar to release him.

It was a quick ride into Grand Forks as the hill climbing eventually turned into a nice refreshing descent into Grand Forks for the annual Omega II dinner. The dinner was superb and the tired team and support crew made their way back to the Ramada Inn for bed, with thoughts of Omega II’s breakfast in the morning and the ascent up the Blueberry Paulson hill tomorrow.

We are devoted to helping little hearts in our community and we need your assistance! There are many different ways to donate, and every amount, big or small, goes a long way for a child in need. General Donation Donate to a Rider

Supporting Cops for Kids, as a Corporate Sponsor, allows your business to be recognized as a company that actively supports local initiatives that benefit children right in your community. Learn More

If you know of a child in need of care, please fill out a Grant Application form. We review every application carefully and provide each family with a response within 4-10 weeks for regular applications and very quickly for emergent situations. Apply Now