After watching the weather closely and despite knowing the odds, we all secretly hoped the weather man would be wrong about the rain. Unfortunately opening the door of the Grand Forks Sandman confirmed the reality of what we were to face. The rain was coming down and a crack of thunder to punctuate the dawn of the new day.

After a huge thank you to the staff at the Ramada Hotel Grand Forks we mounted our bikes for a quick pedal to breakfast hosted at the USCC Hall with the support of Grand Forks Elks Club. The ladies prepared a wonderful meal, crepes with cottage cheese and fruit. Mix that with hot coffee and scrambled eggs and we were ready to weather the storm.

We stepped outside to find the rain had stopped and you could feel the spirit of the group lift with the hope the worst was past and maybe we would get a reprieve for the hill to come. As we started toward Christina Lake there was a bit of a buzz as seasoned riders were offering tips to first timers and the anticipation started to build.

We stopped at the Christina Lake Info Centre where it was a gamble on which layers to keep and which to shed. Then get a little energy boost from the “Cop Cakes” which were on hand and never disappoint. Julio’s mother-in-law, Joan HIRAM, and friends graciously prepared our lunch and we were off. About 3 minutes later the skies opened up and the real rain started.

As we rounded the corner and approached the start of the Paulson climb, reality hit… There is only one way to do this…. One pedal stroke after another. Julio gave his inspirational speech which no one heard as we were all in our own head’s asking “What have I got myself into?” This was a fleeting thought, quickly replaced by memories of the little ambassadors we have met along the way. If they can face open heart surgeries, cancer and a litany of other medical traumas then …. This is “Just a Hill”.

We headed off in the pouring rain to tackle the Paulson, each rider with their own goal in mind; some the desire to be King or Queen of the hill for this year’s ride, others had a goal just to crest over the summit. It quickly came apparent for some that it would take everything they had to dig deep and push beyond their own limitations. This is a team of some of the best people out there. We aren’t professional riders be we are a team. One by one we completed the climb.

Despite the Paulson being the highest summit on the ride and our hardest climb, everyone accepted the challenge and excelled and now we can look back on it as “Just a Hill”.

After everyone had a bite to eat and group photo under the summit sign it was time to push on for Castlegar. In true fashion of the saying “what goes up must come down”, we sped down the hill. Running slightly behind schedule (sorry Courtney) but finally out of the rain we rolled into Safeway parking lot where again we were reminded of why we ride and suffer up the hills. Two families were on hand to share their stories and express their gratitude for the support they received through this amazing organization.

Safeway prepared refreshments and with the assistance of the Lions Club we were able to eat and engage with the families for a few moments before loading up onto the bus.

Off to Trail, BC where it was a stop at Ferraro Foods where Danny Ferraro greeted the team with warm coffee, a donation, and representatives from the local detachment, along with city council greeted the team to show support. Knowing that our peers and our community supports us, makes all memories of the Paulson fade. 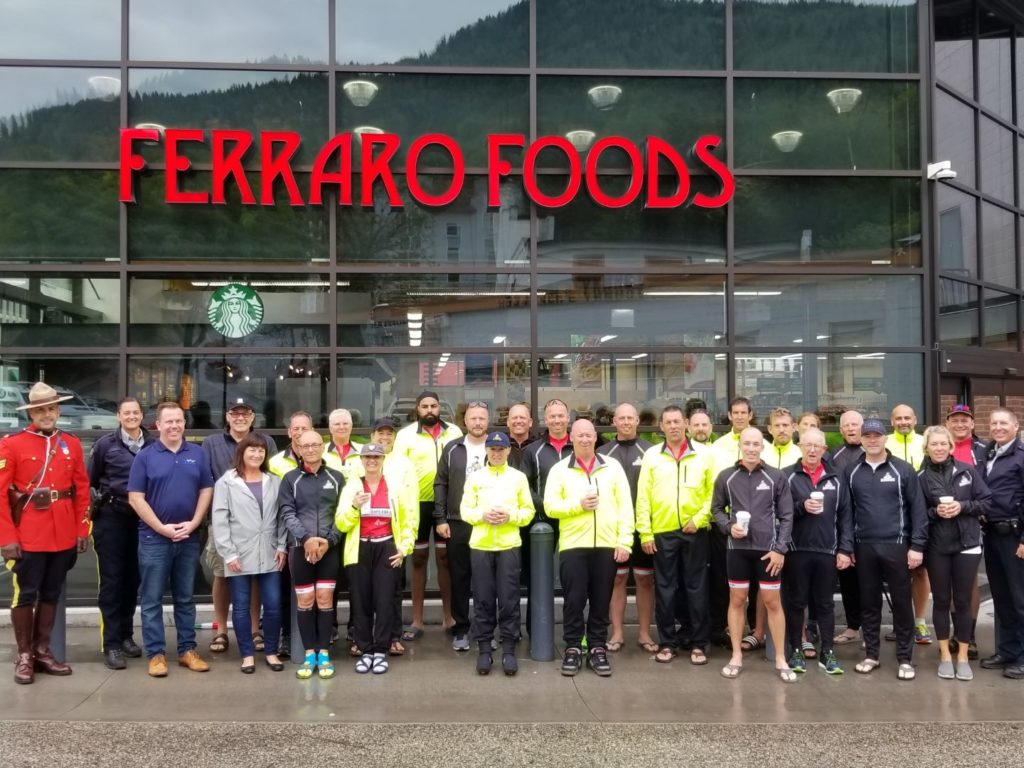 From Ferrero Foods it was off to the Colander Restaurant for supper and they never disappoint. Spaghetti to refuel how can we resist.

With dinner consumed it was a short bus ride up to Rossland to rest our bodies for the night at the beautiful Prestige Mountain Resort. A hot shower and off to bed, as tomorrow will bring challenges of it’s own.

We are devoted to helping little hearts in our community and we need your assistance! There are many different ways to donate, and every amount, big or small, goes a long way for a child in need. General Donation Donate to a Rider

Supporting Cops for Kids, as a Corporate Sponsor, allows your business to be recognized as a company that actively supports local initiatives that benefit children right in your community. Learn More

If you know of a child in need of care, please fill out a Grant Application form. We review every application carefully and provide each family with a response within 4-10 weeks for regular applications and very quickly for emergent situations. Apply Now